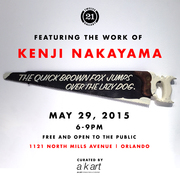 Kenji Nakayama, the artist behind "Signs For The Homeless," is coming to Twelve21 Gallery this month and bringing a bunch of fresh work with him!

Originally from Japan, Nakayama, moved to Boston, Massachusetts at age 25 to pursue an education in traditional sign painting at the Butera School of Art. Originally set out to study mechanical engineering in Tokyo, Nakayama became inspired by the motorcycle culture prevalent in the city and developed a fascination with American vintage cars. His move to the states and his interest in the art of sign painting was directly inspired by the paint, colors, stencils and layering of these vehicles.

Nakayama's diverse practice ranges from careful pin-striping and gilded lettering to hand- cut, multilayered stencil paintings – a unique manifestation of documenting and responding to the environment surrounding him, often taking months to complete. His work serves as a personal diary of experience and influence and his process can be described as a balance between meditation and highly trained craftsmanship. Music, solitude, humor, motorcycles and urban decay serve as reoccurring sources of inspiration.

This event is free and open to the public.