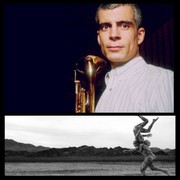 A Musical Performance led by Benoit Glazer along with Dan Jordan, Doug Matthews and Bobby Koelble some of the greatest jazz musicians from Central Florida will be featured at this months In Between Series. It will also double as the closing for the award-winning performance artist Yuri Maurov’s photography show. Expect some lofty sounds from flutes and clarinets, African flavors, and funky odd meters, with a touch of sad ballads and angry mobs. The event is on Monday June 15th from 6-9pm and will be catered by Maxine’s on Shine. Entrance is free to the public.

RSVP for The In Between Series/Yuri Maurov Photography Closing Show to add comments!