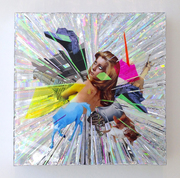 Twelve21 Gallery is proud to present “New Refractions,” the first art show at their new location inside The Orange Studio. The gallery’s curators, Alya Poplawsky and Katy Bakker, have carefully selected the work of Andréa Stanislav to fit the aesthetics of the new space.

New York-based artist, Andréa Stanislav is known for her collages, sculpture, and installation pieces that incorporate glitter, refractive film, bright colors, and the occasional taxidermy animal. Her works are rooted in a maximalist theory –a “more is more” viewpoint where excess is the aesthetic. This theory plays into Stanislav’s goal of involving the viewer on a physical level, activating the eye and creating new perspective at every angle. The combination of refractive film and glitter creates a play on light, that when mixed with her use of bright colors, invites the viewer into an explosive visual stimulation. Stanislav often builds layers of complexity and confusion – much like we experience in the oversaturated world of technology.