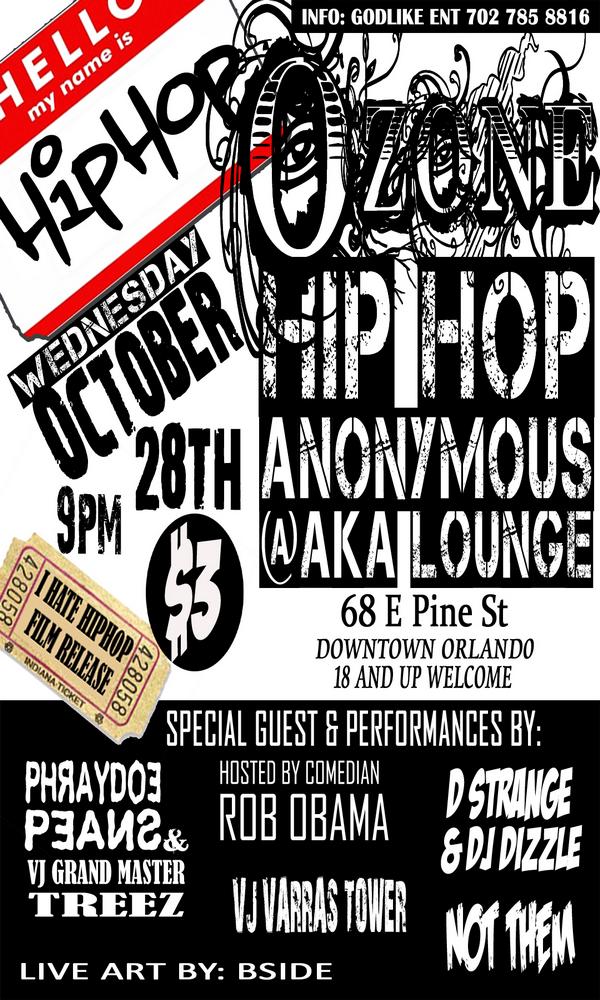 Are you a Hip Hop head fiending for a fix? Then you need to come down to Hip Hop Anonymous at AKA Lounge on Wednesday, October 28th. Godlike Entertainment presents "Hip Hop Anonymous": the first event ever conceived by Hip Hop addicts for Hip Hop addicts. Hip Hop Anonymous specializes in the treatments of microphone fiends, needle junkies, graff heads, and break addicts. The event sets off at 9:00 pm with B-Boys breaking and throwing it down on the dance floor. Needle Junkies will be on the one's and two's as the event caps off with live Hip Hop music performed by Microphone Fiends. Through out the whole event witness Graffiti art being created live before your very eyes by B-Side crew. As a special bonus there will be an exclusive screening of the independent film "I Hate Hip Hop". The entire event will be hosted by special guest Hip Hop comedian Rob Obama.
Special guest Phraydoe Peans, independent Hip Hop artist and microphone fiend, will be performing songs off his new EP called Extraterrestrial in collaboration with VJ Grand Master Treez. Phraydoe Peans has traveled all over the country producing music for artists like living legend "Scarface", underground King "Crooked I" and the late great "Revenue". One can find his work on DJ Drama's Gangsta Grillz: Pimp Hop Introduction. For more information on Phraydoe Peans go to www.phraydoepeans.com. In addition there will be special performances by Hip Hop duo: needle junkie DJ Dizzle and microphone fiend D-Strange, as well as other microphone fiends such as Not Them. VJ Varras Tower will also be blessing eyes with his visual show.

About the film "I Hate Hip Hop":
Spencer doesn't understand Hip Hop. His roommate Sammy tries to explain the origins of Hip Hop, but Spencer continues to make ignorant comments which makes Sammy give up. That night the spirit of Hip Hop casts a spell on Spencer as he sleeps. When he awakens he realizes that he can only speak in rhyme which starts to affect his personal life. Is his new found flow a gift or a curse? Will Spencer get kicked out of film School leaving his ambitions in the can? Will the love of his life breaks things off with him? “I Hate Hip Hop” is a new age comedy for the lovers and haters of Hip Hop, either way you got to see this film. To get more information on the film go to myspace.com/ihatehiphopfilm.

All ages are welcome. AKA Lounge is located @ 68 E. Pine St. Orlando, FL. For more info contact Godlike Entertainment at 702-785-8816 or email at info@phraydoepeans.com. It's $3 at the door and no dress code. Remember the first step to recovery is admitting you need help.

RSVP for Hip Hop Anonymous @ AKA Lounge to add comments!