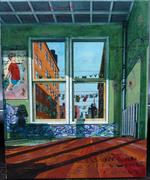 Opening Friday, May 1 from 7 pm to 9 pm
Since his first solo exhibit in 1998, Bryce Hammond has exhibited throughout the United States, and is one of the rare Artists to have actually “sold out” his exhibit on its opening night … on more than one occasion. Featured in New American Paintings and a recipient of a Florida Foundation Fellowship grant, Hammond shares his time between a studio in Brooklyn and a home in Florida. With particular success in Los Angeles and New York, Hammond’s works have been seen in several movies – as part of the art collection of the characters in films. A proud father of two, his children often appear in his paintings.

RSVP for Bryce Hammond -- ALL New Work to add comments!

Comment by Josh Garrick on April 23, 2009 at 11:06am
For anyone who has not yet joined us for an Opening at Millenia, we send a special invitation. Our openings are fun and, of course, free. To RSVP for the Opening Night of this very cool artist, please call 407 304 8100.