Bret Shuford is Charming: A Tale of an American Prince 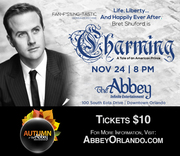 Bret Shuford, who has been seen on Broadway in The Little Mermaid, Beauty and the Beast and Chitty Chitty Bang Bang, will bring his solo show, Charming: A Tale of an American Prince, to The Abbey on November 24th.

In his one-man show Shuford, tells the tale of one Prince’s trek from the faraway Kingdom of Texas to a castle in The East Village. Shuford’s quest is highlighted by the music of Sondheim, Lutvak, Prince and more, with a little Disney magic thrown in for good measure.

RSVP for Bret Shuford is Charming: A Tale of an American Prince to add comments!