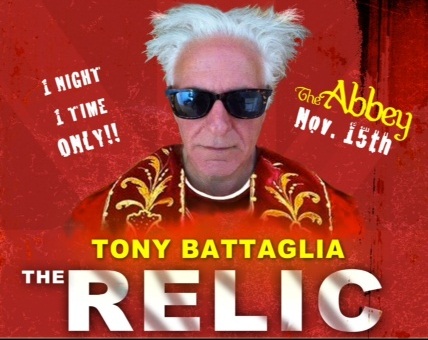 Tony has loaned his talents to such artists as: N’Sync, The Backstreet Boys, Mandy Moore, Shinedown, Puddle Of Mudd and other notables. Credits include film and TV, composing and producing for The Simpsons, Hairspray the motion picture (title song), Nickelodeon’s Clarissa Explains It All and many more.

Battaglia started out in Miami as a session guitarist with some of the most prominent acts of the 1970’s: KC and The Sunshine Band (co-producing KC 10), and R&B legend Betty Wright. Later he played guitar and sang with Joe Walsh on Jay Ferguson’s top 5 single Thunder Island. The producer-of- all-producers, Tom Dowd (Layla, Aretha Franklin), recruited Tony to provide background vocals for Michael Bolton and Third World.

In the 1980’s he moved to NYC, there he opened Studio 900. Again,Tony's talents were in demand by artists such as Keith Richards (The Rolling Stones), pioneer rap group Run DMC, and jazz legend Herbie Mann, just to name a few.

From his personal sense of loss, disappointment, and heartbreak Tony says, “ I’m just sitting here doing time for the crime of being me. [So] I decided, I really had no choice but to write from my heart, and not for any other reason.”