We are furiously preparing for this years Cardboard Art Festival. Please read on about this years events!

A large modern warehouse space in the Mills/50 District will be filled with cardboard art hanging from the ceiling, stuck to the walls and sprouting up from the ground. A different food, music and cultural event is scheduled each night, with gallery hours taking place during the day. 2014 marks the second year of The Daily City® Cardboard Art Festival, put together by Mark Baratelli, Christie Miga, Brendan O’Connor, Denna Beena and presented by The Daily City® blog.

Friday January 24
7 pm – 11 pm: Opening night DJ dance party. $10 admission (pay at the door only, cash preferred). Music and dancing with DJ Nigel and tons of cardboard sculptures filling up the space. Wine and beer by donation. Things get crazy.

Saturday January 25
10 am – 4 pm: Gallery Hours. If you’re the kind of person who likes their art served up while the sun is still in the sky sans the drunk hipsters and art nerds, then come take advantage of our day time gallery hours. $5 admission fee. Artists and Event Directors on hand to give you private tours of the space and work.
7 pm – 11 pm: Cardboard Concert Series. Multiple Bands will take the stage tonight to regale the audience with some fantastic tunes. $10 admission at the door, cash preferred.

Sunday January 26
10am – 12 pm: Kid Camp. Run by the geniuses behind Kid’s Fringe at the Orlando Fringe Festival, this fun daytime event invites children to come and build cardboard creations under the guidance of corrogated experts. $1 donation per child encouraged.
12 pm – 1 pm: Super Joy Riders. Participants of this monthly Do Gooder Bike Ride will be meeting downtown and ending their day of Good Deeds by Bike at the CAF space for a free happy hour and private tour of the installation.

PRODUCER
Mark Baratelli | Winner of the “Orlando Business Journal 40 Under 40 Award,” Mark Baratelli is the creator of The Daily City®, a local-focused culture blog named Best Blog of 2013 by Orlando Magazine, Orlando Weekly and YELP Orlando. The Orlando Weekly went on to say "If everyone in Orlando who claims to care about the arts had 1 percent of Baratelli’s energy and commitment, this city would be a world culture capital." That same newspaper named him "Best Local Advocate" and "Best Arts Advocate.” He is responsible for creating The Food Truck Bazaar, the country’s first travelling food truck event. It travels to 12 Central Florida town per month, every month. Other creations include Night Market, Mobile Art Show, Orlando Improv Festival, and the Audience Choice Awards at the Orlando Fringe Festival.

EVENT DIRECTOR #1
Brendan O'Connor | Brendan is an import from Sault Ste. Marie, Ontario Canada and a graduate of Rollins College where he focused on Environmental and Growth Management Studies. He has a quilt-like resume comprised of event/festival planning, puppet construction/performance and instruction, illustration work, landscape architecture, and public art instillations. He is the founder of The SIT Project which places artistically up-cycled chairs at bus stops that have no seating in the Orlando area which was voted 2 national attention as well. He was the curator of last year’s inaugural CAF event and the creator of the Artist’s Survival Guide at Urban ReThink and the Super Joy Riders: Do Gooder Bike Ride.

EVENT DIRECTOR #2
Christie Miga | Atlanta born artist, Christie Miga, studied at Savannah College of Art and Design, Valencia Community College and UCF. Her art has been seen throughout Orlando in various shops, boutiques, restaurants and galleries including the Orlando Museum of Art. She has been seen creating her paintings live at Blank Space Art Lounge, The Cameo Theater, on the cover of the 2011 United Arts Annual Report and at the Orlando International Fringe Theater Festival. In addition, Christie has sold art work both nationally and internationally in the cities of Paris, France, Johannesburg, South Africa, Brooklyn, New York, L.A., California to name a few. Christie’s style is free flow abstract expressionism. She mixes and experiments with her own paints as well as incorporates different textures, sheens and found objects. Her work is created on the floor by pouring, tilting and shaking the canvas until the compositions are balanced and harmonious. She has excelled at this technique and is now utilizing it to explore deeper themes and emotions. Her involvement in the arts has also included spending five years as a Fringe artist, beginning in the Visual Fringe then moving to performances. In 2011, she was chosen to create a special 20th anniversary work of art for the Fringe. Additionally, she is the Production Manager and Producer for Dog Powered Robot. 2011 also marked Christie's completion of her largest work to date: a 55 foot interactive mural for local internet company, Mojo Interactive.

EVENT DIRECTOR #3
Denna Beena | Owner of Pink Hair Productions, Denna has always had a love for events, art, entertainment, and community. She continues to work on a variety of projects, including Dia de los Murtos & Monster Factory, winner of the Downtown Orlando Partnership's Golden Brick Award, and Spooky Empire (May’s show titled MayHem, and the October show Spooky Empire's Ultimate Horror Weekend). Denna enjoys being a contributing writer at The Daily City, with her favorite project being the super informative Halloween Guide; a comprehensive listing of Halloween-related events in Central Florida! Her latest venture is MyFeaturedCreature.com, a greeting card company that showcases the artistic talent of local and up-and-coming artists, bringing Denna's monsterous ideas to paper. Also, be sure to check out Immersed, Orlando's first ever aquaculture art show, being held at CityArts Factory in February that she's producing for the Central Florida Aquarium Society (www.cflas.org/art).

The local bands Andy Matchett & the Minks and Random Encounter will play a live show Saturday January 25, 7-11pm as part of the 2nd Annual "The Daily City Cardboard Art Festival." This is the farewell/final performance for Andy Matchett & the Minks. Attendees can expect a confetti party, giant parachute, accordions, a full bar slung by Hammered Lamb and a full gallery of cardboard art. 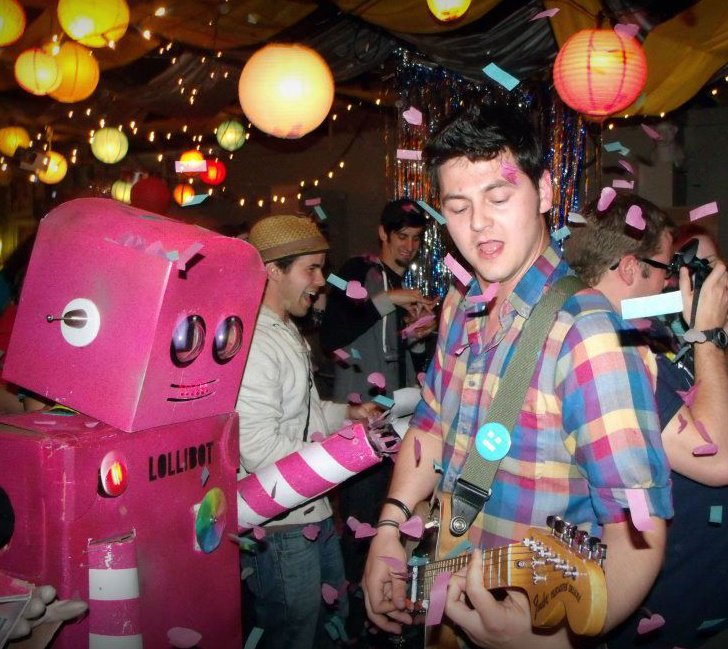 Andy Matchett & the Minks Andy Matchett & The Minks are from Orlando, Florida... Yeah, let's just get that out of the way right now - ORLANDO - A tourist town built on the fine arts of pop music & cartoons. How can meaningful rock music come out of that much sunshine and suburban happiness? The truth is, the dichotomy & secret suffering of the City Beautiful is as important to Andy Matchett's songwriting as any cold, northern borough could ever be. Just like their hometown, The Minks are known for the good times - a live show that "completely transforms the sphere of interaction" with confetti blasts, leaf blowers & a gigantic parachute that covers the crowd - sure, its a tourist attraction. But, when you really get to know the city - and the band - there's a darker, more cultured undercurrent just beyond the fun that's absolutely begging to be explored. Case in point, The Minks' debut album "The Apple Tree Circle" has been hailed by both local fans & critics alike as "near perfect", "truly exceptional" & "a universal pleasure". As much as AM/TM bring the party at shows, the focus in the studio is on seasoned songcraft and lyrical depth. From tongue in cheek "party" tracks like "Too Much Happiness" & "Thoughtsalot" to the emotionally nude ruminations of "Blind Owl" & "(I'll See You On) Monday", this band is as truly interesting & sincere as it gets. As you comb through the crowded landscape of bar bands, mainstream douche rock & hipster fashion trends, Andy Matchett & The Minks stand out as a true original. A band equally at home in the glittery limelight & down in the dumps, existing somewhere between indie & mainstream, party & patience, theme park & Winter Park... all in the image of the wonderfully misunderstood city it came from.

Video game rock with an accordion lead. What does that mean? That means you're going to get punched in the face by nostalgia. Random Encounter plays music from, about, and inspired by video games and general nerd culture.

Drawing from their love of video games, Random Encounter writes and performs a diverse array of original music with strong tie ins to games like The Legend of Zelda, Demon’s Souls, Dead Space, Final Fantasy, and Metroid. In addition to video game covers, inspired originals, and originals based on Russian folklore they are known to mash seemingly unlike songs together like the ‘Ballad of the Three Doctors’ (Doctor Who, Back to the future, Jurassic Park), and ‘Purple Angel’ (Purple Haze, One Winged Angel).

Helloplease.  Can you change my name on this from Jaime Torraco to Kittens Of Industry.  That would rule.  Thanks and see you this weekend.  <3