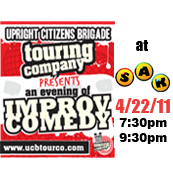 For one night only, the national touring company from the ground-breaking New York/Los Angeles improv comedy theater will be in Orlando… at SAK Comedy Lab!

The UCB Touring Company show features the freshest, funniest longform improv in the country. The Touring Company cast is hand-picked from the best improv comedians in New York City and Los Angeles - these performers are the "next wave" of comedy superstars from the theater that brought you Amy Poehler, Horatio Sanz, Rob Corddry (The Daily Show), Ed Helms (The Daily Show, The Office), and many, many more. UCB TourCo cast credits include Late Night with Conan O'Brien, MadTV, The Daily Show with Jon Stewart, VH1's Best Week Ever to name a few.

RSVP for UCB Touring Company at SAK to add comments!